H is for HMSC HAIDA 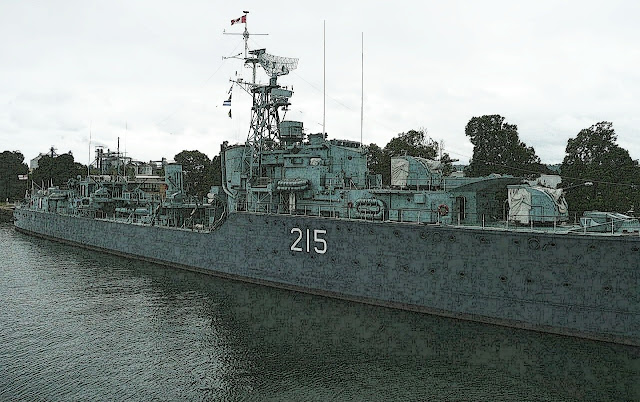 HMCS Haida is the last remaining of the 27 Tribal Class destroyers built for the Royal Canadian Navy, the Royal Navy and the Royal Australian Navy between 1937 and 1945.
The ship operated with the Atlantic Fleet in the post-war years and in 1950 she was taken out of service for modernization and conversion to an Anti-Submarine escort.
After Korea, the ship served in the Canadian Atlantic Fleet working mostly with NATO forces until she was paid-off and taken out of service in 1963.
At the beginning of August 1965, she opened to tourists - a naval museum, maritime memorial and Sea Cadet training ship.
In 2003, she was towed to Hamilton Harbour where the 377' ship continues as a National Historic Site.
~from website
ABC Wednesday
Posted by VioletSky

I love battleships, she's a beauty.

I do like it when a ship has a nice retirement, so sad when they are sent to scrap.

Wonderful history, VioletSky. And I love the textures you used on the photo. It really makes it pop.

Sometimes you do have the most unusual bits of information, but always very interesting. Where do you dig these things up and how do you think of them? That last bit should be my first question, I guess.

My ABC is about the only http://www.meetourclan.com/2011/09/horse-ride.html I can tolerate.

I like your shot of the historic HMCS Haida. The colour of the destroyer matches the water. Did you go inside?

Yes, I did and there is an impressive array of equipment. For all its size it is still very cramped!

I didn't know any of this. I think I need to investigate!

I find it amazing that such heavy objects float on water!