Continuing with the TTC theme from yesterday's post....
I decided to travel the subway and take some photos of the station signs. 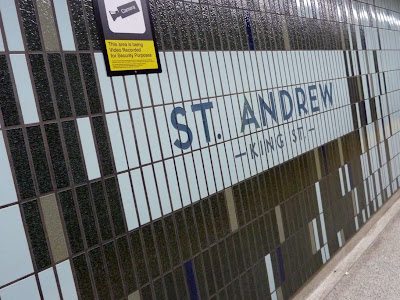 The station walls are undergoing some renovations. Above is one version of the newer signage and tiles and below are an older version of the signs with the vertical tiles and showing the original version and the giant square subway tiles that was underneath, on the left.
(this just looks like it was taken in black and white, but it really is that colour) 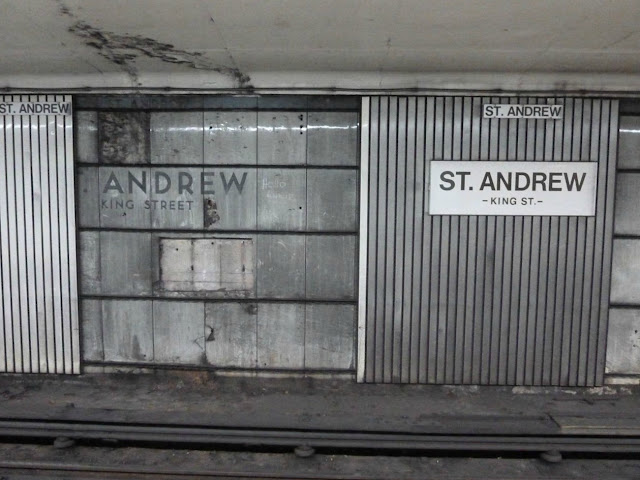 St Andrew station opened in 1963  (there is also a St George and St Patrick, but no St David station. none however were named after the saint or the cross or even England, Scotland or Ireland)

Just went through there today - I think the new works pretty well!

I'm glad to see some of these stations are being updated.

That certainly is a vast improvement. I'm glad to see that renovations are taking place. It's things like this that do matter. The public appreciates it very much, I'm sure. XOX

I haven't been in the subway in years, so this is good to see again.

Wow! Your photos really DO look like they were shot in black & white! Amazing!!

The old and the new right together. Layers of history.

I like the signs - you would definitely not get lost with all of those reminders of where you were! I wonder if the blank spot is where another sign used to be?

Love that tiny bit of yellow appearing in the first shot. It caught my eye right off the bat. Nice shots. This looks like a rather nice station. genie