P is for piggy

at a restaurant in Kingston called Chez Piggy (once owned by Zal Yanovsky of the band the Lovin Spoonful) the hallway outside the washrooms have been decorated with cartoons of pigs by some well-known editorial cartoonists. 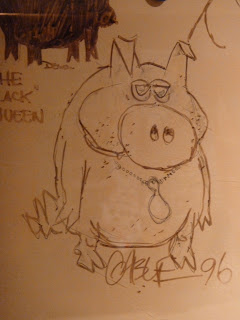 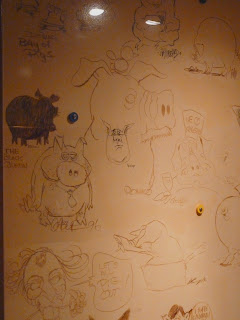 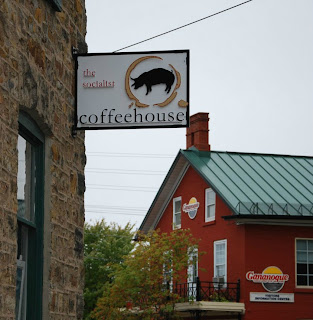 also near Kingston, there is a new coffehouse the Socialist Pig with an attached restaurant called Pig Iron BBQ serving the best pulled pork I have ever had! 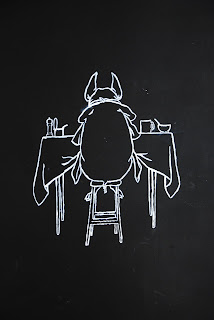 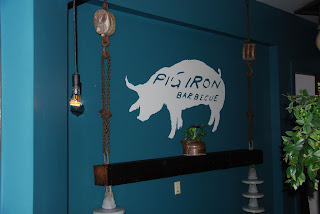 and a real live (for now) piggy 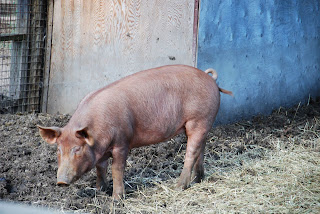 I like the cartoons - wonderful. When I see live pigs I do question my taste for ham, bacon, pork. They are intelligent beings.

Oh, that's so sad! I hope the pig lives to a ripe old age.

Zally! I LOVED him in the Spoonful!

Of them all, I like the white-on-black sketch the best!

I do love pulled pork. The little piggie at the bottom has no idea. Great post!

We had a pig who lived at the end of the lane, - sweet when he was just a little piglet, but rather odoriferous when we wafted by his pen.

I love the drawings!! and piglets :)

It seems a shame this eating of pork as the animals are known to be equally as intelligent as dogs when given the opportunity to thrive. The illustrations of pigs are so delightful.

Plenty of Piggies to make me smile (socialist pig? LOL)... And Perfect Pork can make me drool.

Makes me wish I was vegetarian!

Not sure why "pig" is an attractive word for restaurants but it gets attention! We have a restaurant with a great view of the countryside and distant views of Port Phillip Bay! It is called Pig and Whistle! Then we have a chain of restaurants called Hogs Breath! Very interesting post!

The perfect porcine post. I like the cartoons, and the Lovin Spoonful. Sometimes pass a pair of speckled pigs, I always have to stop and have a look, and then they snuffle over to look at me.

Wonderful series of shots!
Poor little piggy doesn't know if he is safe or should run from the big bad restaurant owners. :)

you mentioned pulled pork and i got hungry instantly.

I much prefer the cartoons to the real thing. Piglets are cute, full-grown less so. My ABC Wednesday this week is Pink!

I would kidnap the live piggie

Visiting from the Signs, Signs link - You have a great collection of signs! Now I'm hungry for BBQ! =9

Loved your piggy post!
Thanks for sharing. And thanks for visiting and taking the time to comment;o)
***
Hope you are having a fabulous week***

Interesting! I love pulled pork, but somehow I wouldn't want to MEET the pig before I eat him!

I recognize Gable! Those cartoons are great.
I'd forgotten about Chez Piggy, but it was a big thing in the 1990s as I recall.

This is really cool!

Near my brother's - on the Isle of Lewis in the UK - is a restauarnt called The Blue Pig. I've often wondered why they called it that but the name is certainly memorable.

Wonderful signs! And I LOVE those cartoons!!!

It's gotta be BACON!