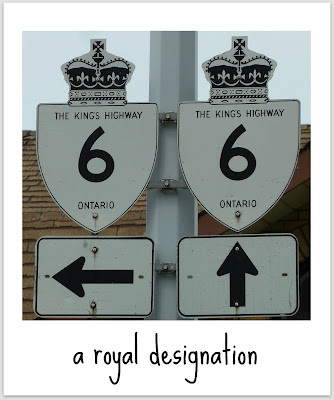 another sign that is disappearing from our highways. this version was designed in 1960 and was updated to be more reflective in the 1970s. the use of "King's Highway" was returned to the signs after a few years absence following King George's death
(I have no idea why "Queen's Highway" wasn't used)
but then in the early 1990s it was again dropped and as the signs become damaged they are being replaced with new ones that read simply "Ontario (which makes them completely bilingual)
signs, signs
Posted by VioletSky

Cool! It's a wonder they aren't disappearing by being stolen by antique collectors.

Nice catch - I had the same thought s as Andy - maybe they will come back!

Any which way but go, this way or that way to the King's Highway.

I like it being called The King's Highway. It's too bad they are stopping that custom.

I wonder how many are still around? I must look more closely.

Funny, sometimes you don't notice something ubiquitous disappearing until it's pointed out. Sallie has a point; odd they're not pilfered. But this shot of yours harkens back to my emergency exit sign; which way to go! Aaack!

@Francisca, it is odd that nowhere are there N and S directions on this set

Too bad, I like the idea of driving on royal roadways. I guess we still have the QEW, but it just doesn't have the same ring as King's Highway.

I'm amazed that you noticed that! I have been totally oblivious to the changes! Now I will have to check the signs when I travel from "here" to "there."