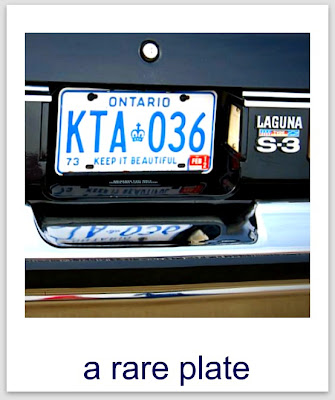 another in a series of disappearing signs....
in 1973, the first of the multi year (5-year) license plates was issued.
until then, plates were issued for one year, then replaced.
after the five years, the year 1973 was removed and by 1982,
the KEEP IT BEAUTIFUL was replaced with a new slogan YOURS TO DISCOVER
these plates are still valid as long as they are renewed by the same owner
signs, signs
Posted by VioletSky

You mean you have to get a new license plate very five years? That seems very labor intensive, not to speak of the bureaucracy. Why is that?

How interesting. Thanks for the little history lesson!

I can't believe that "Keep it Beautiful" plate is still on wheels. The blue letters on our "Yours to Discover" plate are fading.

There aren't many of these around! I had to replace mine as the blue had all faded.

Very interesting. hugs to you.

that is so cool! YOURS TO DISCOVER is also a great slogan.

our plates last for the life of the car.
If you understand them, they'll tell you how old the car is and where it was registered.

No slogans, no personal adaptations. Very boring. Unless you buy a customised plate for a lot of money.

Great way to learn a little history! We see some of the old Oregon plates too -- they've changed over the years.