Z is for Zaire... Zambia, Zimbabwe 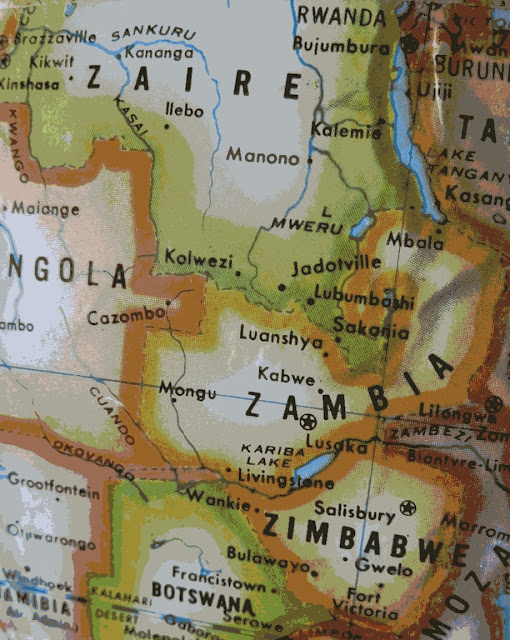 The Republic of Zaire was the name of the present Democratic Republic of the Congo (DRC) between 1971 and 1997. The name of Zaire derives from the Portuguese: Zaire, itself an adaptation of the Kongo word nzere or nzadi, or 'the river that swallows all rivers'.

The former country of Rhodesia, through another complex history of colonialism, became Northern and Southern Rhodesia with the Northern taking on the new name of Zambia with its independence in 1964. This name was derived from the the Zambezi River, which may mean God's River, which flows through the western region of the country.
Southern Rhodesia did not gain international  recognition of its independence until 1980 when it changed its name to Zimbabwe. Various sources hold that the name Zimbabwe is derived from dzimba-dza-mabwe, translated from the Karanga dialect of Shona as 'large houses of stone'. Another theory claims that Zimbabwe is a contracted form of dzimba-hwe which means 'venerated houses' in the Zezuru dialect of Shona, and is usually applied to chiefs' houses or graves.
ABC Wednesday

[edit]
taken from Wikipedia and edited.
which means, this globe is dated from between 1981 and 1997

I always find DR Congo right next to ANOTHER country named Congo very confusing. I prefer Zaire myself.

I'm constantly finding myself looking up maps to see what country is where, and I'm still not very clear about African countries. It doesn't help when they change names.

[I believe that Zimbabwean sculpture in my post was also produced in the park. Perhaps a similar kind of event as you described.]

I prefer Zaire, too! Great post for the Z Day! Hope your week is going well!

African countries do change their names often, but South Africa has been South Africa for a long time, and Egypt has been Egypt much longer than that.
Africa is, however, a great place for Z names. Very interesting post!
— K

Nice places to go to, wish I could.

Not so sure going to either DRC (former Zaire) or Zim would be so nice at the moment.

My daughter recently walked from Zimbabwe to Zambia -- across the bridge at Victoria Falls!

ooh, I am envious! I bet that was a wonderful sight.

It's so hard to keep up with an entire world! Excellent post!

That was a wonderful bit of history, geography, and linguistics for me over coffee at 6:30 am. The A-Z's of Africa.......

Thank you for sharing! Now, I'm off to see what that big Z in the thumbnails represents!

Now I have the song "In Zai in Zaire" running through my head!
Jane x

I remember when a social studies teacher made us memorize all the countries in Africa. Wasn't that an almost total waste of time? :))