Y is for yellow 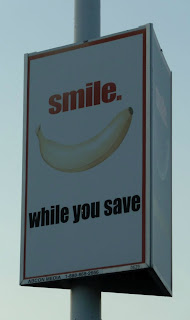 the yellow in this banana has faded a bit, then again,
not all bananas are bright yellow....


Exactly 33 years ago (July 5, 1978) the first no frills store opened down the street from where I lived in East York, Ontario. It was a prototype of the discounted grocery store with a very limited selection of brands that were displayed on shelves in their cardboard shipping boxes with the front cut open (when that box emptied, stock boys had to be called to open the box behind). For the first time, products were not individually priced but had handwritten signs stuck on each shelf underneath the boxes. And we had to pay for bags (which were, and still are, a gaudy shade of yellow). By the 1990s the stores started being converted to franchises with each one displaying the first names of the owners.

Funny how bananas CAN make us smile!

Never heard of that store before.... But i do love banana's and i have been to Ontario! haha

Thanks for sharing
Leontien

Bargins in this economy are so necessary.
Great capture of the banana sign and store.

I hate to say I remember that... :-D Now No Frills is a brand like any other.

This is a new one to me and how funny! I love the banana sign! Fun post for the Y Day! Enjoy the day!

I wish the people who packaged the food displayed in the cardboard shipping boxes would go No Frill. My partner Gene is convinced that modern packaging is not only environmentally unfriendly but a plot to do in the elderly.......
Thank you for such an evocative post!
HelenMac
ABCWednesdayTeam

I learned something new today, that the first No Frills was in East York. Interesting.

I've been in one of those stores which is why I call it "No thrills".
Jane x

We used always to shop at stores like that when we had a houseful of kids. They were called "Waremart Discount" or "Grocery Cart Discount" here -- Back then there were markers for you to write the price on each box you picked up! I know they don't do that anymore.

Now I buy so very few cans and stuff that it isn't worth it. But it sure was then!

We used always to shop at stores like that when we had a houseful of kids. They were called "Waremart Discount" or "Grocery Cart Discount" here -- Back then there were markers for you to write the price on each box you picked up! I know they don't do that anymore.

Now I buy so very few cans and stuff that it isn't worth it. But it sure was then!

What a memory you have! I can't remember them opening at all.

Red Pat: maybe I'm just that much older than you..?!! anyway, it was such a different experience it really stuck in my mind. (though, I admit I had to look up the date)

I don't remember any such thing in the States, but maybe I was in the wrong place. I think they had it in Europe and they still have cheaper stores somewhat like it. No frills stores. I don't buy in large quantities, so I don't have to worry about this so much. I just shop at the store closest to me. It happens to be a posh one :o)

It looks like it has frills now. Guess you can't tell a store by its sign. :) Great capture, fun read!

Thanks for reminding me when "generics" hit the scene. I remember my grandmother was queen of brand loyalty. We even have a "no frills cigarette" called Basic.

Yellow is one of my favorite colors!

My ABC, please come and see.

we have similar "no frills" stores here but in make-shift stalls. i like the banana logo--it's an energy-giving fruit.;p

We had some stores like that when we lived in Colorado. It does save you a little $$$

The smiley shape of bananas translates well into a positive advertising icon!

I love the faded-yellow banana smile. I also like the use of the owner's first name when the stores became franchised. Good idea.
— K

Memories, Isn't that about the same time that regular stories started stocking generic groceries. Like green beans would labelled as such in black block lettering on a white label, I even remember such labeling for "beer" - The 70's!