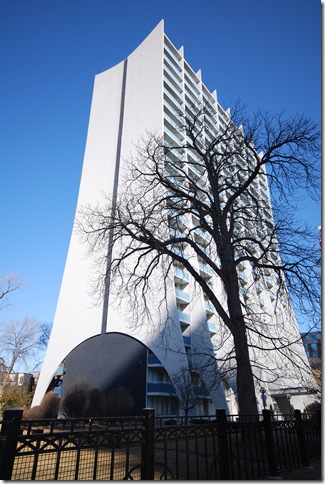 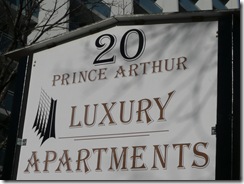 This is perhaps the most iconic of Uno Prii’s work of around the 250 apartment buildings he built in the 60s and 70s in Toronto. A dozen of them have been listed as Heritage Properties. Many of his earlier buildings display a flare for mid-century expressionism. He had fun with the architecture and one of his aims, to make people want to live in apartment buildings, was something almost unheard of in the Toronto of his day. But, with a wave of new immigrants to the city and the first of the baby boomers ready for their first apartment, the timing was perfect for his Jetson’s looking style of buildings to be successful. As is often the case with architecture, it went through a stage of being reviled and desecrated. But in the past decade a new appreciation for his work has blossomed.

Really stunning building/design particularly for the time period in which it was built! I love it! Great shot for the day! Hope you have a great week!

I love the way the interesting building looks with the bare tree in front of it. Interesting post and photograph.

This is a very unique architecture design!

Thank you for sharing your part of the world. Tam