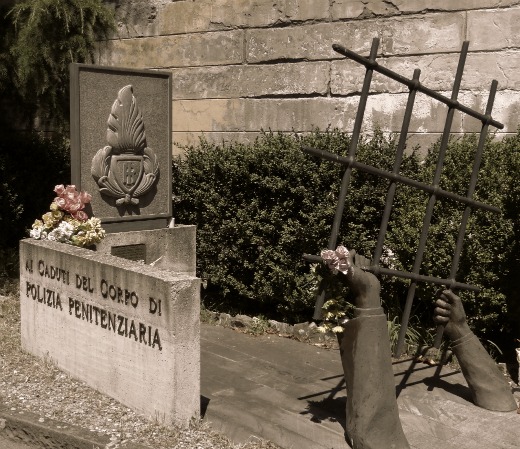 Monument to the fallen officers of the Penitentiary Police at Genoa

Wow! What do the arms holding onto the bars signify?

I am assuming they are the prisoners

Those hands grasping the prison bars is very dramatic!

Wow, very dramatic, those arms with the bars.

It is interesting that this particular police force would choose to have its fallen members commemorated with this particular image. I agree, that it is an incredibly strong image, but it is all about the 'enemy' nothing about their comrades. How fascinating. There is a strong element of 'facism' in this image. I wonder what period it was erected in? Hah, the link says the group was only formed in 1990.

when I took this photo, I at first thought it was a memorial to the prisoners. I had to google the words to get a correct translation and realized I was very wrong!

WOW!
i also first thought that this must be for the prisoners...
hmmm, for their guards? i think that is so weird.
i guess i like the image as such. but not to commemorate guards. its in a way too negative.