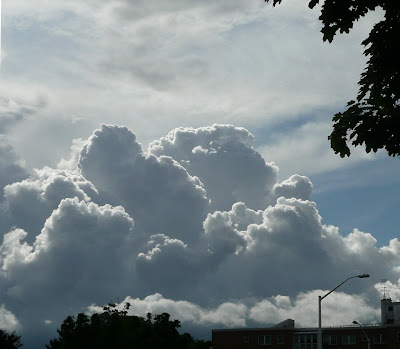 These are just like the clouds we had! Only I think you did a better job in capturing them.

Somehow I was thinking about songs of R.E.M. One where they go to the dreamy heights in the end of the album. Great puffs.

These are the kind of clouds I like because they make shapes - great for a little quality time with the kids.

Beautiful majectic clouds! You captured them from a great perspective to bring out the power!

Those would be called billowy for sure... Did they hide a storm?

Cool! That's one of my favorite kinds of clouds to photograph. They look like they're so low you could reach out and touch them.

Dramatic skies ... the like of which are seldom seen where I live. Lovely photograph ;--)
Hugs and blessings,

I love those big fat puffy clouds. It looks like you could jump on them and they would go boing! boing! MB

Thank you, JBar, Marju and SMT.

They were similar, Gennasus, aw, thanks.
Though, I did wish those buildings and light standards weren't in the way, Deborah.

Are you still humming that song, chrome3d?

DFP and srp - not so much a storm, but 10 minutes later the sky was all dull grey and crying for the loss of the billowy, puffiness.

They changed so quickly, Lynn, I no time to touch. So sad. They get the creative juices flowing, don't they, Laughing Idiot?

I talked to 3 other people were also amazed at this sight, HRG, on their drive home from work.

I know, MB, I wanted to scramble over the buildings to get at them!

Brenda @ Its A Beautiful Life said...

I love the light and dark!

Hi Brenda. They were in quite a pile. I was amazed at how much of the sun got through to the edges.

How about those wonderful puffy clouds and blue skies we've been having! I think we are neighbors because I recognise many of the scenes you post previously.
WOW!! that caterpiller!!!

Glad it was still shining because the clouds seem to tell a different story!

Hey, welcome, Naturegirl. I had lost you for a while. Actually was trying to remember your blog name this week - I really need to clean up my RSS feeds. We are neighbours, very close, I think, and seeing the same wonderful clouds the past couple of weeks (until today, sigh).

That was the most amazing part, Barb. There was empty blue sky to the south of this cloud mass.

So enjoyed your recent pictures. Just can't get that giant caterpillar out of my mind!!!