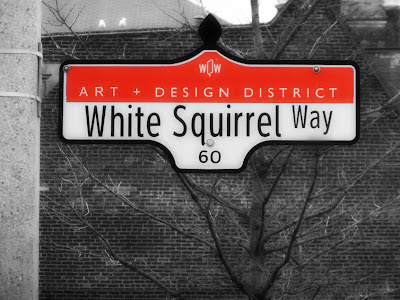 The White Squirrel might want to beware of those two pigeons on the roof....
(and yes, there really is a white squirrel.
just because I haven't seen him doesn't mean he doesn't exist.
the city wouldn't name a street after something that doesn't exist, would it?)

I've never seen a white squirrel but I think I remember RedPat saying she had.

I have faith -- I believe in white squirrels.

BTW, I looked at WQW on the sign, the post title, and in your text each twice before I realized it didn't say WOW -- I was having so much trouble figuring out why WOW was for West Queen West. I think I need a nap.

No worries, Sallie, it is very stylistic!

I've seen black, grey, brown, and red squirrels, but NEVER a white squirrel. Huh. I guess I have to add that to my bucket list!

Well, after seeing a dalmatian horse (http://calrat.blogspot.com) last Saturday, I'm willing to believe anything is possible.

Super cute sign!
Although white or otherwise, I still hate all squirrels. They're eating the tops off my tulips now. :S

Great sign Violet! I haven't seen this one. I have seen the white squirrels many times though when my studio was down in that area.

I have yet to see a red squirrel in the Netherlands because they are very timid. I doubt I will ever see a white squirrel.

i haven't seen a squirrel in any color! LOL

I have heard of these elusive white squirrels, but haven't been lucky enough to see one.

I cannot even imagine a white squirrel. They must be unusual.This is one great sign. I lie the colors used and the name itself. A nice one to see as you enter in the art and design district. genie

I cannot even imagine a white squirrel. They must be unusual.This is one great sign. I lie the colors used and the name itself. A nice one to see as you enter in the art and design district. genie

your photo is stunning!
well done

What a great sign, and a story to go with it. No white squirrels here, just the occasional white rabbit.