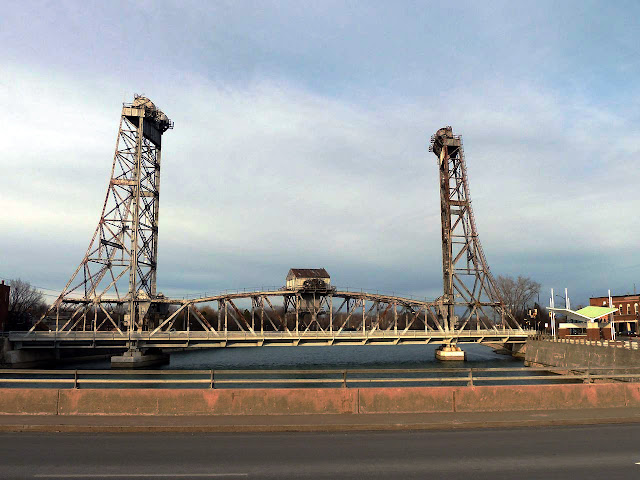 or the Main Street Bridge as it is more commonly called in Welland where it has become the symbol of the city. It is a vertical lift bridge crossing the abandoned portion of the Welland Canal. It was locked permanently in a lowered position after the shipping season in 1972 when the canal was rerouted to the east of the city to make it a straighter and safer route. The bridge is now a oneway west-bound road crossing the recreational waterway from the city centre.

this view give an idea how the vertical towers dominate the skyline
from Main Street. The bridge is actually at a an angle to accommodate the lack of a right angle between Main Street and the canal channel.
for the SundayBridges celebrating its 100th post!
Posted by VioletSky

Oh my, this is one huge bridge to have in the middle of town! I wonder if it gets lit up at Christmas?

That's one heck of a big bridge to dominate the skyline of the town. I guess that's sometthing you don't forget when you grow up there. I wonder if kids dive off it in the summertime?

Very interesting. I've visited the Welland canal before but it must have been the new route. This however has a lot of character.

Nice bridge and construction from the past. Great it still exist as a token of the ingenuity of the human mind. Love it.

I would assume if it is in locked position the cars would be happy they no longer have to wait for the bridge to be lowered. It would be nice to see this bridge decorated during the Christmas holidays. Happy Sunday!

looks like the support tower is tilting and falling down.

I fondly remember large lift bridges from my childhood, we used to stand at the end, waive to the sailors, and wonder to what exotic location they were traveling.

This is one fascinating bridge. I be incorrect, but I am thinking the middle span - the part between the 2 tower-like structures - is the part that went up for the big boats to get through.genie

A most interesting post! It is good to see the bridge "repurposed" as we seem to say these days.
;-D
«Louis» thanks you for this fine contribution to his 100th Sunday Bridge Series post!

I haven't been to Welland in a very long time. Guess I need to put that on my list of future road trips. :)