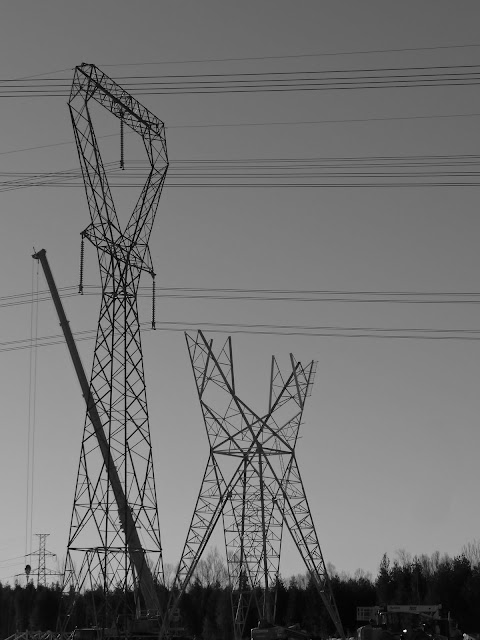 Weekend in Black and White
Posted by VioletSky

A very unusual shot. It's rare to see pylons half-built.

Wow, neat catch! I have never seen these towers under construction before!

Ditto Dimples. I notice these hydro towers often, their different shapes, how they impact the landscape. But I've never seen them being built. Nice B&W shot.

When I am driving along the road and I see these tower things I despise them. I think they are eyesores. Then, when I see them in a picture, they become so interesting and appealing to the eye. So much metal for such simple little wires. It always amazes me. Great photography.

This is great! All the different shapes and designs in those pylons are very attractive, and you've caught an unusual stage. I think the unfinished one looks a bit like an alien ;)

I like the shot, but is it supposed to be like that? The second one seem unfinished.

There were several bits of the pylon laying on the ground waiting for the crane was to move them into place.

I never thought about the fact that they had to be put together.

I was out taking photos of power towers yesterday at sunset. Hmmm. I have never seen one being built.

Very nice shots of fiants of iron!
Thanks for sharing;o)