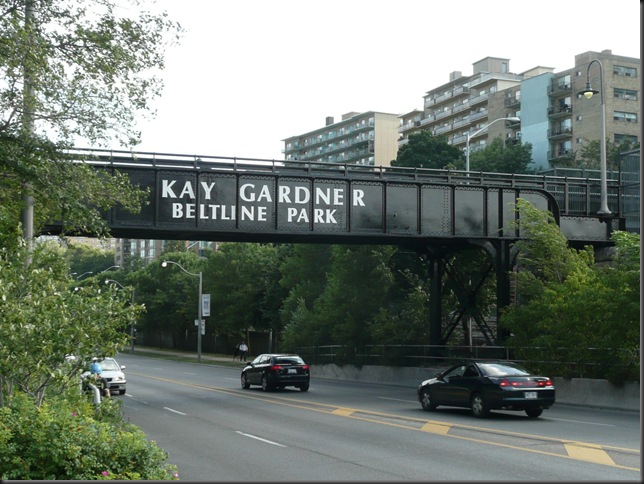 The Toronto Belt Line Railway was a very short lived commuter railway line built in the early 1890s to promote new suburban developments. For a variety of reasons it was never successful. Eventually, the city bought the lands and a pedestrian walkway was created that followed the defunct line. Here we have the iron bridge that crosses Yonge St at the eastern edge of the beltway.

Great shot of the bridge... but I do think it looks a little somber for a pedestrian overpass. Maybe because it's black?

It still looks like a railway from this view, doesn't it? I wonder if many people use it.

I'm all for more pedestrian walkways in the city (or in the country)... is it well-used?

Hmm, sombre? I thought it looked a little classy (and freshly painted)

Yes, it is well used, cyclists as well as walkers, as far as I could tell.

EG: just to the left is Mt Pleasant Cemetery, which is a very popular spot for walking. to the right are the subway tracks.

Pedestrian walkway is important as well, glad that they are using this railway I mean instead of to lay there blocked.
hugs
Léia - Bonjour Luxembourg

who is Kay? Some one famous?

Interesting, it reminds me bridges here:)
Happy Sunday to you!

Before Kay Gardner became a City councillor, she was the driving force in saving this beltline from developers in order to create a greenspace. It was bought by the city in 1990 and renamed in her honour in 2000.

That's nice that they could make it of some use :D

walkways are now part of the cityscape. and i love how they make pedestrians' lives a bit easier.:p lovely shot.

Good that they at least made something of it, I like how it says what it is!

This is great for the pedestrians, and nice that that honor the person that wanted to save it.

«Louis» finds it curious that the line wasn't successful. The contributing factors must make an interesting story. Be that as it may, «Louis» thanks you for this contribution to Sunday Bridges.

The best part, Pat, is that she is still alive to enjoy the honour.

Louis, apparently there was a depression in the 1890s, so development didn't happen as quickly as they had anticipated. later, it was used for industry, but the grade was too steep for that to be profitable.

Glad it was turned into a pedestrian walkway. I'm sure the neighboring residents are happy too...a little quieter than trains passing by. Now if this were in the San Fran bay area, it would be covered with graffiti! Thanks for stopping by.