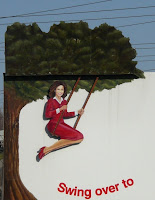 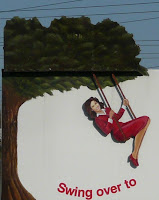 Cute, I didn't know advertisement like that still existed. It seems so 50's.

Thanks, Pete, I see it also brought a smile to you.

Yes, It is a billboard from the 50's, Irene. When new developments went up on the corner where it first stood (a mile up the road) there was such an outcry over its possible demise, that it was saved and brought down to the actual dealership.

It's such a warm feeling 50's billboard...
Our county disallows bill boards which is rather lovely, and the ads on buildings faces must fall into code re size and effect.

The tree and her clothes used to change with the seasons, Delwyn, but I don't think that happens anymore.

I wish we didn't have so many billboards.